Several months ago the driver of an intercity bus was standing outside the vehicle waiting to leave for Montreal when he noticed the bus back out of its parking spot and leave the parking lot. The passengers on board didn’t know that the man driving the bus wasn’t authorized to operate the vehicle until he began driving erratically and went the wrong way down a one-way street.

The police immediately began following the vehicle, which hit a city bus blocking its path and jumped the sidewalk before returning to the terminal. The perpetrator was arrested and booked on a variety of charges including vehicle theft and impaired driving. Luckily, no one was hurt either on board the vehicle or on the street, but it's easy to imagine the situation ending very differently.

Darius McCollum, a New York man obsessed with mass transit, has spent over 30 years impersonating transit employees. He has been arrested 30 times for stealing both buses and trains, many times with unsuspecting passengers on board. Surprisingly, his actions never resulted in any significant casualties.

On April 11th 2018 in Washington, DC an armed man boarded a bus with a knife. He tried to rob a passenger before walking to the front of the bus, ordering the driver and all passengers to exit the bus, and attempting to drive away. The man was eventually apprehended, and neither the driver or the passengers were harmed. 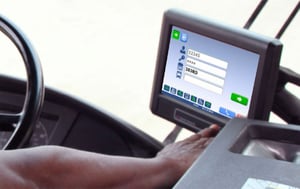 Bus theft isn’t something new. A quick google search on the people who steal buses turns up a laundry list of incidents dating back to the 1940s when one man stole a 20-passenger bus from a White Plains, NY garage and drove it at break-neck speed for seven miles before abandoning it at the side of the road. In another case a man, in an attempt to make some much-needed cash, stole a New York City bus and drove it for five hours collecting and ultimately stealing the $15 in fares he’d amassed.

Over the next few decades, you can find stories of stolen buses crashing into chicken coups in Maryland, people absconding with vehicles in LA and Calgary while drivers were taking bathroom breaks, and many cases of up-to-no-good teenagers stealing unlocked buses and going on joyrides, which go unnoticed by transit agencies – sometimes for hours.

In most of these stories the thief gets arrested and the agency is inconvenienced, perhaps embarrassed. The truth of the matter is that it’s only a matter of time before people get seriously hurt, and when this happens the price the agency will pay in terms of liability and public perception will be severe. It will expose the agency to a barrage of questions from the media and from riders asking why steps weren’t taken to ensure the safety of the public. And let’s not forget the actual cost which will be thousands, if not millions of dollars in legal fees and payouts.

The fact of the matter is that most agencies tend not to think about the kind of technology they need to secure their fleet until its too late. Most call their ITS provider once something has already gone awry, after they’ve had an incident, or when the press gets wind of an incident and informs the public.

Securing the safety of riders, operators, and the public should be a top priorities for every agency, regardless of size. If the technology exists for an operator to covertly alert dispatch of an emergency, to prevent the transmission from engaging without proper access credentials, to prevent theft and enhance security, shouldn’t all agencies be considering it as a basic cost of doing business? We certainly think so.

Quieter Electric Vehicles: Great for the Environment but a Pedestrian Safety Concern