Quieter Electric Vehicles: Great for the Environment but a Pedestrian Safety Concern

As more transit agencies begin to inject quieter electric vehicles into their fleets, pedestrian safety in intersections continues to be a top concern.

Many transit agencies are well underway with their plans to inject Electric Vehicles (EVs) into their fleets. Doing so offers a wide variety of benefits for both the agency and the environment. From reduced maintenance and fuel costs to lower greenhouse emissions, there is absolutely no doubt that moving from a diesel fleet to an electric one is the smart, eco-friendly option. However, it’s possible that this move could bring about other problems that agencies aren’t thinking about such as an uptick in pedestrian accidents.

In 2017, the NYC Department of Health published a report on pedestrian fatalities in New York City between 2012 and 2014 as part of its Vision Zero Initiative to prevent traffic-related injuries and deaths. The report showed that during those two years, there were 497 pedestrian fatalities. Forty-four of those deaths were accidents involving pedestrians and one of the city’s buses. In its most recent report from 2019, the National Highway Traffic Safety Administration (NHTSA) reported 51 fatalities and hundreds of injuries involving pedestrians and public buses. Of course, New York City isn’t alone. Many cities are struggling with this issue.

The primary producer of noise – the engine – is vastly different in EVs than in a traditional diesel engine. Combustible engines powered by fossil fuels are noisy. Some estimates put the decibel level of a diesel bus at 80-85 decibels. That’s equivalent to a gas-powered lawnmower or an exceptionally raucous restaurant. Contrast that with the decibel levels typically found on an EV. An electric bus engine typically has a decibel level just below 60 DBS, which is about equal to the levels found in everyday conversation. 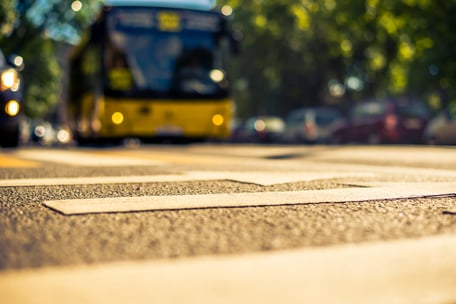 As a result, it should cause concern for transit agencies and cities with high pedestrian traffic, especially those that are already trying to figure out how to keep distracted pedestrians from getting hit by moving vehicles in crosswalks. These noiseless engines also pose a considerable problem for pedestrians with hearing or visual disabilities as well.

This issue isn’t isolated to electric buses either; all electric vehicles present a problem for pedestrians due to their quiet engines. In some places, manufacturers are adding fake noise to their cars when traveling at slow speeds to alert pedestrians of their presence. In fact, by July 2021, all new electric car models sold in the European Union must now make artificial noise when traveling below 12 mph or reversing to alert pedestrians of their presence. As of 2020, all of London’s electric buses are required to play artificial noise when traveling at low speeds. The United States isn’t far behind.

While artificial noise can be one way to help alleviate the problem, it’s likely not the only answer. Transit agencies looking to combat pedestrian accidents involving their buses must consider other technologies to reduce pedestrian accidents, which is where Turn Warning™ comes in.

TurnWarning automatically detects when a bus is turning and sends an audio announcement to alert pedestrians to remain careful and alert as the bus moves into the crosswalk. It can also proactively remind drivers to check for pedestrians as they move into a turn. Announcements can be made from both sides of the vehicle or just in the direction of the turn.

We’d love to tell you more about how TurnWarning can help your agency reduce pedestrian accidents that result from pedestrians who are distracted or can’t hear your quiet electric vehicles as they navigate your busy city streets.

Contact Clever Devices today to learn more about how to add TurnWarning to your electric vehicles.

Clever Devices May 14, 2019
Training and Learning

Top 3 Things Eroding Your ITS Return on Investment

When it comes to intelligent transportation technology, the set it and forget it training approach is often a surefire path to lost return on...

Clever Devices May 16, 2018
Safety and Security