Keeping operators and riders safe from onboard crime is a top priority for all transit agencies. What technology should agencies consider to prevent theft?

Keeping operators and riders safe from onboard crime and bus theft is high atop the list of priorities for all transit agencies. Most agencies have sophisticated camera systems, panic buttons, and even covert microphone systems that enable dispatchers to see and hear what is happening onboard their vehicles at all times. That is a significant first step in thwarting crime, but is it enough? And, if it is not, what type of technology should agencies be considering today to prevent crime and bus theft in the future?

The Danger of Unauthorized Bus Operators

In April 2020, a Dallas-area transit bus was hijacked by an unauthorized individual and taken on a meandering path through numerous suburbs before being stopped by police utilizing spike strips. The driver was directed by the gunman to continue his regular route before later giving turn-by-turn directions. Thankfully, both the driver and the lone passenger were left unharmed, but police shot the perpetrator who later succumbed to his injuries. The situation could have ended much worse.

In a hostage situation onboard a transit vehicle, an operator must think quickly and make smart decisions to mitigate the risk to the lives and safety of passengers, pedestrians, and themselves. Having a panic button or a covert microphone is critical, but having dispatchers listen in to what is happening, and alerting authorities is just one piece of the solution. If the bus is in motion, people are still in danger.

In April of 2017, a Washington, DC bus theft was thwarted when a man boarded a bus and, after ordering all passengers and the driver off the vehicle, attempted to drive off. Unlucky enough for the perpetrator, the quick-thinking operator alerted dispatch of what was happening. Authorities arrived as he continued to attempt to get the bus to move.

Thefts, hijackings, joyrides, and accidents due to vulnerable or unsecured buses are nothing new. They will continue to be a liability for transit agencies unless preventative measures are taken to better secure and protect vehicles, drivers, passengers, and the general public from those with malicious intent. Unfortunately, many agencies don’t think about how technology can prevent these potentially horrific situations until it happens to them. The best time to engage with an ITS provider to install preventative measures is before a highly publicized incident resulting in loss of life, injury, or property damage. 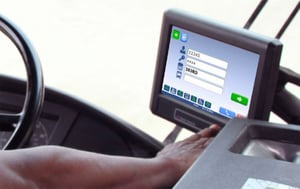 Secure Bus Access offers several options to give an agency a great chance at thwarting a crime before it’s even committed. Designed to keep unauthorized users from being able to move a vehicle in the first place, the system requires a unique pin be entered before the transmission can be engaged. Secure Bus Access can also be tied into the seat vacancy switch. When the operator leaves their seat for any reason for a predetermined period of time, a full or soft log off is triggered. This time threshold is configurable, and once it has been breached, the transmission is locked and can only be unlocked after the secure PIN is re-entered by the driver.

But, should something happen onboard as it did in Dallas, the driver can alert dispatch and engage covert microphones that allow the dispatcher to listen in to what is happening and alert the proper authorities. CleverCAD® incorporates the bus events into incident reporting, event tracking, and playback modules for further investigation.

5 Reasons You Should Attend CONNECT2022

Starting on September 12, leaders and representatives from transit agencies across North America will gather in Austin, Texas for CONNECT2022....