Transportation Resiliency in the Face of Climate Change

Transit agencies need to embrace a culture of resiliency and be prepared to respond to disruptions on the fly in the face of a changing climate.

Planning for the Future and Unexpected Changes
in Weather Patterns

Changes in climate and weather patterns around the world have had significant impacts on businesses, individuals and government agencies, especially in the public transit sector. In 2017 alone, weather and climate disasters caused $16 billion in damage across the United States. Whether it's flooding from hurricanes in New York City, massive snowstorms in Boston or devastating California wildfires, transit agencies need to embrace a culture of resiliency and be prepared to respond to disruptions on the fly when their riders rely on them most.

Climate Incidents and Their Impact on Transit

Extreme inclement weather can cause strain on an agency in a number of ways, from higher than average ridership to unexpected detours or delays. Being able to manage the unexpected when it happens can help an agency become more resilient in the face of a changing climate.

Extreme weather can suddenly cripple the infrastructure that a transit agency relies on in numerous scenarios. Here are some real-world examples of how changing climates have had an impact on transit:

Is Your Transit Agency Resilient? 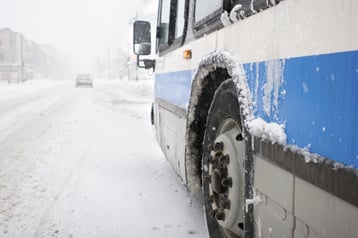 In the context of disruption management, resilience is defined by a transit system’s ability to continue functioning efficiently to move riders from one place to another when faced with disruptive or unexpected conditions. This goes for not only everyday service disruptions but also catastrophic weather events. Transportation resilience is of the greatest concern to the individuals and communities an agency serves.

Regardless of where you stand on the political spectrum, and whether you believe that we have caused, and ultimately can stop or reverse the warming of our planet, the data suggests a shift in the severity of storms over the past decade. Simply sweeping the problem under the rug will not make the challenges we face from a changing climate disappear but will only serve to create more severe problems down the road.

Transit agencies must analyze all possible scenarios that could occur in their region in order to implement an effective contingency plan that addresses issues before they occur. The key to becoming resilient is offering riders alternatives that still allow them to reach their destination despite these issues.

Leveraging Disruption Management in CleverCAD for a More Resilient Agency

The Disruption Management module in CleverCAD allows agencies to react quickly to service disruptions that occur due to inclement weather, traffic and road conditions or vehicle maintenance issues. Users can make service changes to address issues on the fly, and all changes are immediately reflected on vehicles and in our BusTime real-time passenger information system. This ensures that both operators and passengers have access to up-to-date information, in real-time.

Learn more about how Disruption Management for CleverCAD can help your agency become more resilient.

Preparing for an Unknown Future with Transit Scenario Planning Tools

Transit scenario planning tools from Clever Devices let your agency see the impact of your decisions before you put them into production.